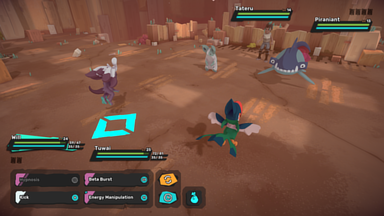 Combat against an NPC tamer.

Combat involves turn-based competition in the 2v2 format. Battles against untamed Temtem can occur in grass, on water, and in caves. Combat can also be initiated against NPC tamers and other players. Casual battles including most of the ones in the story campaign make use of the regular squad composed of at least one and up to six Temtem. It is visible in the bottom left of the overworld interface and can be accessed via the menu. The first two Temtem in the squad are the first to be sent out in combat. Competitive battles however use the competitive squad, containing eight Temtem. Squads can be changed via the TemDeck.

Various factors affect the performance of Temtem in combat. These include Types, Stats, Techniques, Traits, and the use of Gear Items.

Stats heavily influence the performance of Temtem in combat. They determine health or hit points (

SPDEF), and the turn order (

SPD). The stat totals of a Temtem are determined by their level, base stats, single values, and training values.

The health bar is based on the

HP stat. It is the green top bar displayed on the interface of each Temtem in combat. Damage taken by techniques will reduce the remaining

HP. Once the health bar reaches zero, the Temtem is knocked out. Healing items including the Temessence Vial can be used to restore

HP during combat with untamed Temtem and tamer NPCs.

HP does not regenerate after combat and can only be restored with such items, at a Temporium, or by some NPCs.

The stamina bar is based on the

STA stat. It is the cyan bottom bar displayed on the interface of each Temtem in combat. Each technique consumes a certain amount of

STA remains for a technique, the Temtem Overexerts. Depending on the excess stamina cost, twice as much

HP will be lost and the Temtem suffers a turn penalty. If more

HP was lost than the Temtem had remaining, it will be knocked out. Untamed Temtem account for this by not using techniques if overexertion would lead to getting knocked out. Similarly, they will refrain from using self-damaging techniques. At the end of each turn, Temtem regain 5% + 1 of their stat total, including Temtem that swapped out. An additional 15% is recovered for Temtem ordered to Rest. The stamina bar will fully replenish after combat.

Techniques are the attacks Temtem can use. They each have their own type, with higher or lower effectiveness depending on the type of the target Temtem as explained above. Techniques of the

Physical category apply damage based on the user's

Special techniques use the user's

SPDEF stats. They may also alter Stats or apply Status Conditions. These modifications are primarily done by

Status techniques, though. Aside from type, category, and damage values, techniques differentiate themselves with varying stamina costs, hold, priority, synergy, and targeting properties.

Each Temtem species has one of two possible Traits, which act as passive effects in combat. They are activated under various circumstances and their effects vary likewise, like affecting damage, applying status conditions or modifying stats. Most traits have an exclusively positive effect, though in some cases the effects may have both advantages and disadvantages, and a handful of traits are entirely negative.

Temtem can be equipped with Gear items for various effects. There are distinctions between types of Gear, of which PvP Gear are relevant for combat. Like Traits, their effects are passive and activated under specific conditions. These effects include altering damage of techniques of certain types, restoring

Casual combat makes use of the regular squad of up to six Temtem. Battles occur in a 2v2 format, with players and opponents having one or two Temtem present on the field depending on the remaining viable Temtem. Each turn one of four techniques can be selected per Temtem, which are acted out in order of the total

SPD stats (after accounting for priority) of all Temtem present on the field. Alternatively, Temtem can be swapped out for other Temtem in the player's squad, items can be used and untamed Temtem can be ran away from. When all opponents have been knocked out, the battle has been won. Conversely, when the player's Temtem are all knocked out, they will be transported to the most recently visited Temporium and lose 250 Pansun for each untamed Temtem, or the same amount once for each NPC tamer.

Wild Temtem can be found around the Airborne Archipelago. They are usually found in grass, on water or in caves and similar landmarks. During battles, medicine and capture items can be used. Untamed Temtem can be tamed using TemCards, with catch rates affected by level,

HP, species, status conditions, kind of TemCard and use of the Four-Leaf Clover. Capturing or defeating untamed Temtem will reward experience as well as TVs depending on their levels and species. Unlike other battles, untamed Temtem can be ran away from, with a chance of success depending on the speed of the player's Temtem compared to the encountered ones. Use of the Decoy Gear will ensure successfully running away.

The formula below is used in part to determine whether a run attempt is succesful. After the calculation is complete, a random number between 1 and 1,000 is generated, and if this is lower than the value of RUN, the attempt succeeds.

CurrentHP - The current HP % of your slowest Temtem.

LD - Level Difference, the difference in levels between your slowest Temtem and the fastest rival.

SD - Speed Difference, the difference in speed between your slowest Temtem and the fastest rival.

Tries - The amount of times you have tried to run from the battle. On your first attempt this already counts as 1.

NPC tamers will challenge the player to fights, which in most cases can not be refused. While medicine items can be used, TemCards will fail on opponent Temtem. It is also not possible to run away from tamer battles, and as such they can only be concluded by defeating them. If a battle has been lost by the player, the NPC tamer will re-challenge them in most cases. Asides from experience and TVs, defeating NPC tamers will reward the player with Pansun. This does not apply during Co-op for the player that already defeated specific tamers.

Players can initiate casual battles against each other via the player interact menu. The selected opponent will receive a notification and can accept or deny the request. These battles function in the same way as combat against NPC tamers, but without any rewards. Additionally, Temtem are healed up prior to the battle and return to their previous state afterwards.

A post-story island with several facilities each with their own unique PvE activity to do. (Main article: Tamer's Paradise)

Current order of the pick-and-ban phase.

Competitive battles don't use the regular squad of six Temtem, but a competitive squad of eight, with a clausal of all Temtem being different species. Up to three competitive squads can be arranged in the TemDeck. One of these squads is selected for each competitive battle, after which the pick-and-ban phase ensues. During this phase, depending on the blue or orange color players got assigned, they will take turns picking their own Temtem and banning those of the opponent. Two Temtem get banned on each side and five get picked for the match. The player on the blue side will start with the speed arrow, which determines the Temtem to move first in cases of speed ties. After a speed tie happened, the speed arrow switches to the other player.

Competitive matches can be spectated from the player interaction menu. They last for a maximum of 25 turns. Each turn has a limit of 30 seconds for the player to make their strategic decision, with extended time provided by a total reserve timer of 3 minutes throughout the match. If the reserve timer reaches zero, the turn timer reduces to 20 seconds. The winner is the first player to knock out all Temtem of the opponent. If at the end of the 25th turn both players still have viable Temtem remaining, the following criteria are used to determine the winner, in order:

Basic competitive matches between players can be initiated via the player interaction menu, in the same way as casual battles. Similarly, Temtem are healed prior to each battle and return to their previous state afterwards, and there are no rewards.

Ranked Matchmaking uses the competitive ruleset. Players are assigned a ranking based on their performances against each other and will be rewarded Pansun for each win, depending on their ranking value. Contrary to all other forms of combat, Ranked Matchmaking makes use of autoscaling, maximizing levels to the level cap and SVs to 50.

Tournaments use the competitive ruleset.

Dojo Wars use the competitive ruleset. Clubs are able to engage in a weekly event to conquer special club Dojos by challenging the club that currently manages them. Each island houses one of these Dojos for a total of six. Dojo Wars take on a tournament-like format where in each round, five members of each participating club engage in three matches against an opposing club. At the end of each round, the club with the most wins moves on. The winning club of this tournament faces against the club that currently manages the dojo in the finals. In this round, eleven members from each club participate in three battles and whichever club earns the most points will become the managing club for the dojo during the next week.

Retrieved from "https://temtem.wiki.gg/wiki/Combat?oldid=68805"
Category:
Cookies help us deliver our services. By using our services, you agree to our use of cookies.