Temtem is a massively multiplayer creature-collection adventure game created by the Spain-based studio Crema and published by Humble.[1]. It was released on PC, PS5, Xbox Series X, and Nintendo Switch on September 6, 2022 following a 2-year Steam Early Access period and a successful Kickstarter.

Every kid dreams about becoming a Temtem tamer; exploring the six islands of the Airborne Archipelago, discovering new species, and making good friends along the way. Now it’s your turn to embark on an epic adventure and make those dreams come true.

Catch new Temtem on Omninesia’s floating islands, battle other tamers on the sandy beaches of Deniz or trade with your friends in Tucma’s ash-covered fields. Defeat the ever-annoying Clan Belsoto and end their plot to rule over the Archipelago, beat all eight Dojo Leaders, and become the ultimate Temtem tamer!

The Airborne Archipelago are floating islands where Temtem and humans coexist peacefully. Each island is a whole different world, but there is something we all have in common – our love for Temtem and Temtem battles! Intrepid tamers like yourself travel on airships to the furthest reaches of the Archipelago to find the best Temtem. Every young tamer dreams of becoming the best… But not everything is fun and peaceful on the islands. Behind the scenes, Clan Belsoto is weaving a dastardly conspiracy against Temtem and humans alike. You will need all the friends and your best Temtem to defeat the wicked Clan Belsoto. 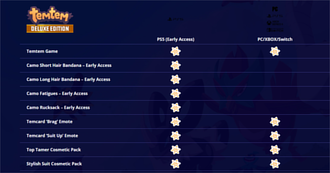 The Deluxe Edition of Temtem comes bundled with some exclusive cosmetics that will not be available anywhere else. This will launch with version 1.0 on September 6, 2022, and if you have already purchased the game, a separate upgrade will be available on the same date.

Temtem was successfully funded in a Kickstarter campaign on June 3, 2018.

At Sony's State of Play event on August 6 in 2020, it was announced that Temtem would arrive on the PlayStation 5 in 2021, later that same day the official Xbox Twitter confirmed that the game would also reach the Xbox Series X.

A day later, after many questions about what happened to the PlayStation 4 and Xbox One versions, they posted on the official Temtem Twitter account that the versions had been canceled so that they could fully focus on getting the best experience possible on the new consoles, those who had helped fund the Kickstarter had the option of getting refunds or migrating to the new generation of consoles.

Temtem released into Steam Early Access on January 21, 2020, and the full version released on September 6, 2022.