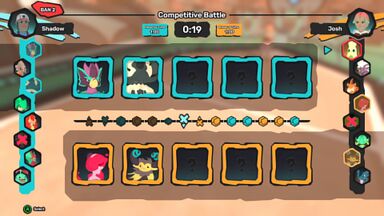 Example of a pick-and-ban phase in Ranked Matchmaking.

Every Temtem in Ranked Matchmaking is autoscaled. This means their levels will be raised to the level cap and their SVs are maxed at 50. This feature was implemented to improve access to the competitive scene.[1] TVs and Techniques of Temtem are not affected. Autoscaling is exclusive to Ranked Matchmaking and does not apply for all other forms of combat.

Ranked Matchmaking makes use of the Tamer Matchmaking Rating (TMR), which is a modified version of the Elo rating system.[2] It is used to match players against each other and to determine their ranking. Players will start with ten placement matches to define their initial TMR. Afterwards, they will match up with other players in the queue based on their current TMR. This number varies depending on wins and losses. For each win, a specific value is added to the TMR of the winner, and subtracted from the TMR of the loser. The value is determined by the TMR of both the winner and loser, most notably the difference between them. A high-ranked player winning against a low-ranked player will earn only a few points, while the low-ranked player only loses a few points. However, a low-ranked player winning against a high-ranked player will earn many points, and similarly the high-ranked player will lose many. The self-correcting nature of this rating system ensures that in the long run, the number properly represents the comparative qualities of players.

The first iteration of Ranked Matchmaking rewards Pansun for each victory, with higher TMR values leading to higher Pansun yields. A future update will expand on the rewards for this gameplay feature.[3]

The Ranked Matchmaking feature will be expanded with more features including seasons, leagues, medals and more rewards. The Early Access period of the game will be treated as a pre-season until the game is released, after which periodic seasons are implemented. At that point, balance patches will only be applied between competitive seasons to ensure a stable competitive scenario during the season.[3]

Retrieved from "https://temtem.wiki.gg/index.php?title=Ranked_Matchmaking&oldid=32989"
Category:
Cookies help us deliver our services. By using our services, you agree to our use of cookies.