Trading is a multiplayer game mechanic that allows tamers to trade Temtem, Items, and Pansuns with other players. Players must be near each other to trade. 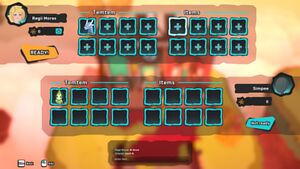 The trade system is split into two parts, one for each tamer. The top section consists of your offers, while the bottom is of the other player. The very bottom contains a chat box to communicate to the other player during the trade. Tamers can add Temtem they wish to trade by clicking one of the 8 Temtem slots. Temtem can be selected from both your party and your TemDeck, but your Starter Temtem, and NPC gifted Temtem, can not be traded. Up to 8 Temtem can be traded at a time.

Tamers can also add items or Pansuns to the trade. Items are added like Temtem; by clicking one of the 8 item slots. Pansuns can be added by clicking the + next to the Pansun icon in the top left.

The trade will commence after both tamers are satisfied with the trade and have both clicked "Ready".

Tamer's have a hidden level cap that stops them from using Temtem received from trades that are a higher level than the ones the tamer currently has. This level cap increases whenever a tamer catches a new Temtem or when a Temtem levels up. It does not increase from trading Temtem.

The following Temtem can evolve through trading:

There are a number of trades players can perform with non-player characters throughout the game.

The Temtem Connoisseur in Tucma requests a Bigu. In return, he will give the player the egg timer.

As part of the Beached Narwhal quest, Akatzin will request the player trades him a Toxolotl in return for a surfboard.