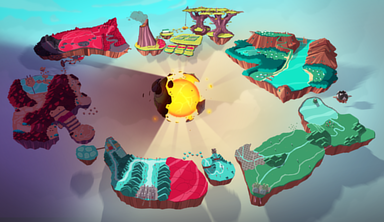 An outdated artistic representation of the islands of the Airborne Archipelago. Clockwise from the top-center: Omninesia, Deniz, Arbury, Cipanku, Kisiwa, Tucma.

The Airborne Archipelago is the colourful and diverse world of Temtem, where humans coexist peacefully with creatures called Temtem.

As the mantras of the Miyako sages say, reality is but one facet of the Universe.

It is made of tightly wound Spheres, one inside the other, turning and spinning, like uncounted matryoshki of existence, eternally humming to themselves. The only known one is the Middle Sphere, where the Airborne Archipelago is located.[1]

The Archipelago is composed of six main islands, gravitationally locked in slow rotation around the flaming orb called the Pan-Sun. Blessed by its light and warmth, humans and Temtem coexist peacefully in this floating Archipelago. Nobody has ever returned from the depths of the Downbelow and nothing is known for sure about the cloudy Highabove – so this is the extent of the known world.

Before the invention of airships, islands were almost completely isolated, and during those centuries very different cultures evolved on each one of the islands. Travel between the islands is now primarily done by airships.[1]

In the minds of every human in the Archipelago, the name of Deniz evokes sunny vistas of white houses on rugged hillsides, descending all the way down to the glittering waters of the Sillaro. One way or another, the floating sea has marked the lives of all Denizans. From the first sea-faring merchants to the droves of modern tourists that flock to Arissola, the Denizans are a lively culture, outgoing and completely at home everywhere they might find good conversation and a challenging Temtem battle.

The sailor brotherhoods that started taming Wind and Water Temtem ages ago are still active. Although many visitors only know the shores of Briçal de Mar, it pays to take the scenic route to Zadar, visit the ruins of Windward Fort, or explore the Aguamarina Caves. The town of Turquesa and Indigo Lake hold their own surprises, although nothing is always as idyllic as it might seem under the hot sun and cool breeze of Deniz…[1]

Omninesian legends tell of a great volcanic eruption that shook the great Paninsula of old, breaking the mammoth island into smaller chunks and flinging them away. While Tucma and Kisiwa were the bigger ones, a scattering of smaller fragments drifted together. Their settlers called them the Myrisles, and during the foundation years they connected them with ingeniously built bridges, creating a whole new culture. The Omninesians, as they call themselves nowadays, are a reflection of that original spirit, endlessly resourceful and interested in communication and trade, always ready to make the most of their tiny but lush islands.

A prime example of this principle is The Lift, a contraption that communicates both halves of Omninesia. Except for occasional interruptions due to volcanic ash, airship traffic to Omninesia is regular and reliable. The Anak volcano is still semi-active, the one last remnant of that great primeval eruption. Within its depths, Fire Temtem abound, swimming in the lava pools. The jungles of the Flywalk are a great spot to catch Nature Temtem, and the twin towns of Mokupuni and Nanga both boast excellent dojos – which probably explains why the villas at Atoll Row are always full.[1]

Tucma, the End of All Things[edit]

In a way, Tucma is the darker side of the Omninesian story – while the Myrisles are green and lush, spared from volcanic ejecta by the prevailing winds, those same currents routinely shower Tucma in toxic fumes and ashes. As a result, the surface of Tucma has become a lifeless wasteland, and the Tucmani have retreated underground. There, in the depths of the Nahua Crater, they have created their great city of Quetzal, a marvel of stone, crystal, light and industry. Once part of the same mega-island as Kisiwa, Tucma is now famous for its metalwork, jewellery and Crystal Temtem.

Very few venture to the surface, except to catch Toxic Temtem in the noxious waters of the Xolot Reservoir or to participate in the traditional Tucmani sport of rock-hopping – using just a hook, the practitioners jump from rock to rock, covering great distances. Before airships were invented, the Tucmani used this method to visit their brethren in Kisiwa. Nowadays, it has become a bit of a relic, like the ruins of the former capital, entombed under the crystalline surface of the Amethyst Barrens.[1]

Kisiwa is the hilly cousin of Tucma, its main feature being the impassable Kilima Range that divides the island into two distinct halves. Hotter and drier than any of the other islands, Kisiwa features an unrivalled variety of landscapes. The eastern side has Vumbi and its famous dojo, as well as the wild Kusini Highlands beyond the Jino Gap, inhabited by a variety of Neutral Temtem. The only viable ways to cross the island are the tunnels excavated by the tireless Kisiwans – Chini in the wild southern solitudes and Juu in the north, near Lake Moyo and the capital city of Uhuru. The western deserts are deceptive in appearance, for they are home to many species of Earth Temtem.

Once warlike and divided, the tribes of Kisiwa have long been united under an informal but highly effective federation. The slow and dangerous rock-hopping route to Tucma has been replaced with an efficient airship service that transports people, goods and Temtem to and from the busy terminal at Uhuru. The Kisiwans, closely related to the Tucmani, are skilled Temtem breeders and trainers. They are hospitable and honourable hosts, and they value freedom and friendship above all.[1]

No place has grown faster than Cipanku in the last few years. Changes have been more sudden and spectacular here than elsewhere. Once a very traditional culture with a tendency for quiet perfectionism and spiritual contemplation, the Cipanki have adapted to the times - and in fact have brought about many of those changes themselves. While northern Cipanku still holds its allure as a land of hilltop temples and tranquil rice fields, Nanto has turned into a burgeoning metropolis, driven by the innovations of their labs.

While Cipanku was once more closely associated with the Electric Temtem venerated by monks, nowadays its renown comes from their invention of Digital Temtem. These new creatures are making the impossible seem feasible and have sparked a wave of inventions that might revolutionise not just Temtem fighting, but also make airships obsolete. The Archipelago is at the threshold of a new era, and the inventive Cipanki are at the heart of it.[1]

Arbury, land of rain and books[edit]

Arbury has traditionally been considered a melancholic land of constant rain, rolling green hills and endless academic quibbles. While the weather is certainly wet and the rivalry between the two Colleges of the University is legendary, Arbury is more than the clichés make of it. As the prime educational spot in the Archipelago, many serious Temtem tamers come to the Victorian streets of Properton or the Gothic alleys of Lochburg to hone their skills.

In Arbury, regions are states of mind. It’s only natural that the brainy dons of Properton College favour Mental Temtem, some of which are reputedly so intelligent they can hold philosophical debates with the academics. Conversely, the powerful Melee Temtem of southern Arbury are natural best mates with their rowdy Lochburg tamers. As for visitors, whether they prefer to contemplate the romantic shores of Loch Adúar, hunt along the pleasant Meadowdale or splash in the bogs of the Mudshire Marshes, they are always welcome to a cup of tea or a pint of stout – and a Temtem battle to boot![1]

Retrieved from "https://temtem.wiki.gg/wiki/Airborne_Archipelago?oldid=66566"
Category:
Cookies help us deliver our services. By using our services, you agree to our use of cookies.