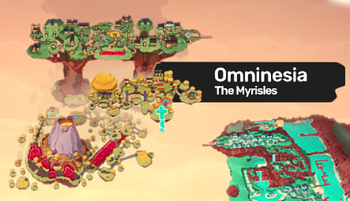 This map shows locations for a number of different categories. it is possible to filter for wanted categories on the top left of the map window.


Please be aware that this map is work in progress.

The name "Omninesia" is an exonym. The citizens call their home "the Myrisles", which is the closest thing to its original pronunciation.

Fire Temtem are ancestral Temtem of the island, and thus the traditional types for its citizens. For instance, Capyre appear commonly in folklore as tricksters. Its unreliable nature is embedded deeply in the culture. Omninesians also commonly give Raiber to novice trainers because its relatively mild-mannered nature for a Fire Temtem. Some Omninesians who branch out to tame Temtem of other types can experience minor backlash. However, other types have shaped its history as well. For instance, the first airships were built in the Myrisles, learning to navigate the thermals and winds by watching

Wind Temtem, especially Saku and its ability to inflate air pockets within its body. Omninesia also has a long tradition of wind and percussion instruments, possibly influenced by its population of Wind types.

Omninesians pride themselves on their welcoming culture. "I see you" and "We share breath" are common Omninesian greetings. The later can also be used to mean "Welcome." "Out-Islander" is a common Omninesian way of referring to people who aren't native to the Myrisles, and, for short, out-islanders call people from the Myrisles "omni"--however, it is unclear if this nickname is derogatory. As a testament to their welcoming culture, the Myrisles Engineering Cooperative has opened its beds and working space to all travelers; once only open to its members, the Coop services foreigners for free. Because of this history, many foreigners, such as Kisiwans and Denizans, have settled in Nanga.

The Myrisles has two natural wonders which it reveres very honorably. The first, the volcano Anak, has always deeply shaped the people of the Myrisles. Anak, who "destroys and creates", is often either depicted as a female or with "it". Even today, it still erupts occasionally and creates new land for the people to build onto using their bridge-building skills. An initiation ritual in Omninesian tradition involves a pilgramage to Anak to recieve a blessing of the goddess and catch some wild

Fire Temtem. It's possible a mythical Temtem named by legends "the Spirit of Anak" lives within the volcano.

The second natural wonder of the Myrisles is the Giant Banyan. The Banyan is a part of the great tree that sustains and nourishes the Myrisles. Although holy, it is also a common place, a sort of safe haven. It is welcome to everyone, belonging to everyone. In times of need, Omninesians have gathered there many times, but Temtem benefit from the tree as well. For instance, some use of its bark as a shield. The Banyan is filled with elusive Kinu, its spirit-guardian. They are a Temtem, and it is said a tamer doesn't catch Kinu; rather, they select who to be their tamer. They will know if the tamer is worthy, but they are very selective with their acquaintances. It is the guardian spirit of the Anak.

Omninesians create all kinds of foods and products from natural resources. Their traditional healing salve out of jungle roots, and the clothes of Mokupuni's The Flutes of Pansunset are natively made. The fruit-based production of Mokupuni results in kiwi, mango, papaya, kumquat, one of their main exports pomelos, and others.

Retrieved from "https://temtem.wiki.gg/index.php?title=Omninesia&oldid=58496"
Category:
Hidden category:
Cookies help us deliver our services. By using our services, you agree to our use of cookies.