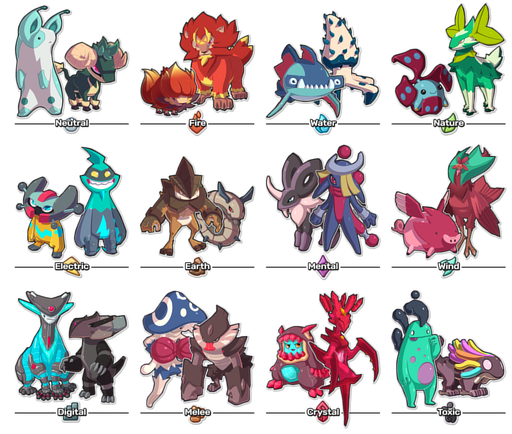 Examples of various Temtem. Note: some designs have been altered since they were published.

Temtem are the titular fictional creatures and a major element of the game Temtem. They come in a variety of forms and types. Although many Temtem resemble animals, some are inspired by plants, mythological creatures or in part even objects. As of Patch 1.2, there are 164 Temtem species known and obtainable.

In the Airborne Archipelago, Temtem are tamed and used as traveling companions. In addition, collecting Temtem is a popular hobby. It is implied that Temtem like to battle, which is considered a sport among people. Various aspects of Temtem are important in combat. The Tempedia stores information on the many species.

Types - Each Temtem species can have one or two types, and each technique has a type as well. The typing of Temtem will determine whether they take more or less damage from techniques of specific types. The types are

Techniques - During combat, techniques can be used. Each technique has its own properties, such as type (as explained above), category, damage, stamina cost, hold value, priority and synergy. In addition, some techniques are capable of inflicting status conditions. The pool of techniques a Temtem can use depends on the species.

Traits - Each Temtem species can have one of two possible traits. These are passive properties that have an effect during combat. Certain traits affect type effectiveness, others apply status conditions and some may raise or lower stats.

Stats - Stats are the seven factors that determine how Temtem perform in combat. They affect damage calculations, turn order and limits to the use of techniques. The seven stats are

SPDEF. The stat total for each of the stats is determined by the species-specific base stats, the individual's single values, the variable training values and the level of the Temtem.

Evolution - Many species are capable of Evolution upon increasing a certain amount of levels, whereby they change into different species. Species related to each other in such a way are referred to as evolutionary lines.

Breeding - Male and female Temtem that share at least one type among them, are compatible for breeding. They can produce eggs with the first form of the evolutionary line of the female parent. Several aspects of the parents are inherited onto the offspring. The amount of times a tamed Temtem can breed is limited by fertility.

Luma - Luma Temtem are a very rare occurence. They have different coloration, glow and particle effects, and a bright shine when entering combat. Unlike most other properties of Temtem, the Luma status does not affect their combat performance and is a purely cosmetic variation. The current odds of encountering an untamed Luma Temtem are 1 in 7500.

The following list details known Temtem species, their Types and base stats.

Various unused Temtem designs have been revealed. These designs were discarded or altered in major ways, and will not be added to the game.

Retrieved from "https://temtem.wiki.gg/wiki/Temtem_(creatures)?oldid=69306"
Categories:
Cookies help us deliver our services. By using our services, you agree to our use of cookies.